This is an archived review of the Elton John show at the Golden 1 Center, Sacramento, on January 16, 2019.

Sir Elton John brought his “Farewell Yellow Brick Road” tour to Golden 1 Wednesday night, playing for nearly three hours to a sold-out crowd. The tour, Elton’s final tour in his 50 year career, began in September of 2018 and will conclude in December of 2020 after a run of over 300 shows worldwide. By the time the tour is over, Sir Elton will have played over 4,000 shows in his career. For me, though, this was my first (and last) time seeing Elton John live.

The first album I ever bought was Elton John’s Greatest Hits. It had been out a few years when I saved up enough money from mowing lawns and washing cars in the neighborhood to buy my first album. I’ll admit the album I really wanted was KISS Destroyer – but the dreadfully small record section at Montgomery Ward didn’t have it, or anything else that caught my eye, and my mom wasn’t buying in to my “need” to stop at a real record store (or at least Gemco, which had a decent selection). But I knew a few of the songs on the Greatest Hits album, so it was my first album by default. It became, and has remained, one of my favorite albums. So, to finally see the legend perform those songs (and many more) live was a dream come true many years in the making, and I know I wasn’t alone.

The mood in the crowd Wednesday night was one of celebration. Many were dressed in crazy Elton-like costumes, wearing oversized heart-shaped novelty glasses, sequined hats, or in some cases full-on Captain Fantastic getups. The excitement was palpable. Some, like me, were seeing Sir Elton for the first time (“I can’t believe we’re finally seeing him!” was overheard numerous times), while others were watching their last show of many.

No matter who in the audience has seen Sir Elton the most, none can hold a candle to his band members. Unlike many artists who put together a new touring band for each tour, the core of Elton’s band has been amazingly consistent over the years (and it shows – the band is extremely tight). Sir Elton’s first tour began in early 1970, and consisted of Elton on piano, Nigel Olsson on drums, and Dee Murray on bass. Nigel is on-hand for the farewell tour, and as Sir Elton remarked “he was there for the first show, and he’ll be here for the last”. Altogether, Nigel Olsson has played nearly 2,400 of Sir Elton’s 3,800+ shows (as well as most of his albums).

At 71 years of age, Elton no longer jumps up onto his piano, or does leg kicks while banging on the keys, but that’s not to say he’s lacking in energy. His piano playing was at times furious, his voice was as strong as ever, and he would occasionally pump his fists, point to the crowd, or stand and raise his arms to get the crowd pumped up, all while riding around the stage on his motorized piano.

The show began shortly after 8:00pm with a single chord played on the piano – arguably the most well known major 7th chord in pop music – followed by a pregnant pause before launching into the rest of “Bennie and the Jets”, a fitting first song given it’s from 1973’s “Goodbye Yellow Brick Road” album. If we had been playing a game of “name that tune”, the capacity crowd would have all been able to name that tune in one note.

The “Goodbye Yellow Brick Road” album would dominate the night, with 6 of the 24 songs performed. No other album had more than 3 songs. Altogether, 11 studio albums and one compilation out of Elton’s 33 studio albums were represented. (He played “Philadelphia Freedom” from the “Greatest Hits Volume II” compilation.) Sir Elton mostly stuck to the hits, but dropped in a few deeper cuts (much to the delight of the fans).

The first deep cut of the night, “All the Girls Love Alice”, was the second song played and is also from “Goodbye Yellow Brick Road”. It’s a song Elton has played live in the past, but not on recent tours, so it was a welcome addition to the setlist.

Several times throughout the night, Sir Elton took a moment to talk to the crowd. He told a story about how any young artist would be thrilled to have someone cover one of their songs, and it wouldn’t really matter who it was. “We would have been happy if the Chipmunks covered one of our songs!,” he told the crowd. He then explained how blown away he and his writing partner Bernie Taupin were in 1972 when they discovered their song “Border Song” was being covered by none other than Aretha Franklin, to whom Elton dedicated the song.

About a third of the way through the show, Elton took a moment to thank the fans for 50 years of support and great memories. He said that playing to a live audience is the greatest gift an artist can have and gave his sincere and heartfelt thanks to the fans for allowing his incredible career to happen.

The most poignant moment came, though, when Elton talked about his former drug and alcohol addiction, and how in 1990 he finally asked for help and got clean. He said that once he got clean he regretted not having been on the forefront in the fight against AIDS in the years prior. So, he created the Elton John AIDS Foundation, and talked about how proud he is that it’s grown to become what it is today, adding “I truly believe that in my lifetime we will see the end of this epidemic.” He then played “Believe,” while the video backdrop showed images of Elton and his husband David Furnish doing work for the foundation all over the world.

Another deep cut of the night was “Indian Sunset”, a lesser known song from the album “Madman Across the Water”, which is normally only played live in smaller venues like Elton’s Las Vegas residency at Caesars Palace. All of the backing band left the stage except percussionist Ray Cooper, who accompanied Elton for an intimate performance of the song.

The hits were well represented as well. The main set was closed out with a raucous performance of “Saturday Night’s Alright for Fighting”, while the two song encore had “Your Song” and “Goodbye Yellow Brick Road”. When the final song finished, Elton boarded a lift that took him up to the top of the stage and through an opening in the video screen, riding off beyond the yellow brick road one final time in Sacramento. 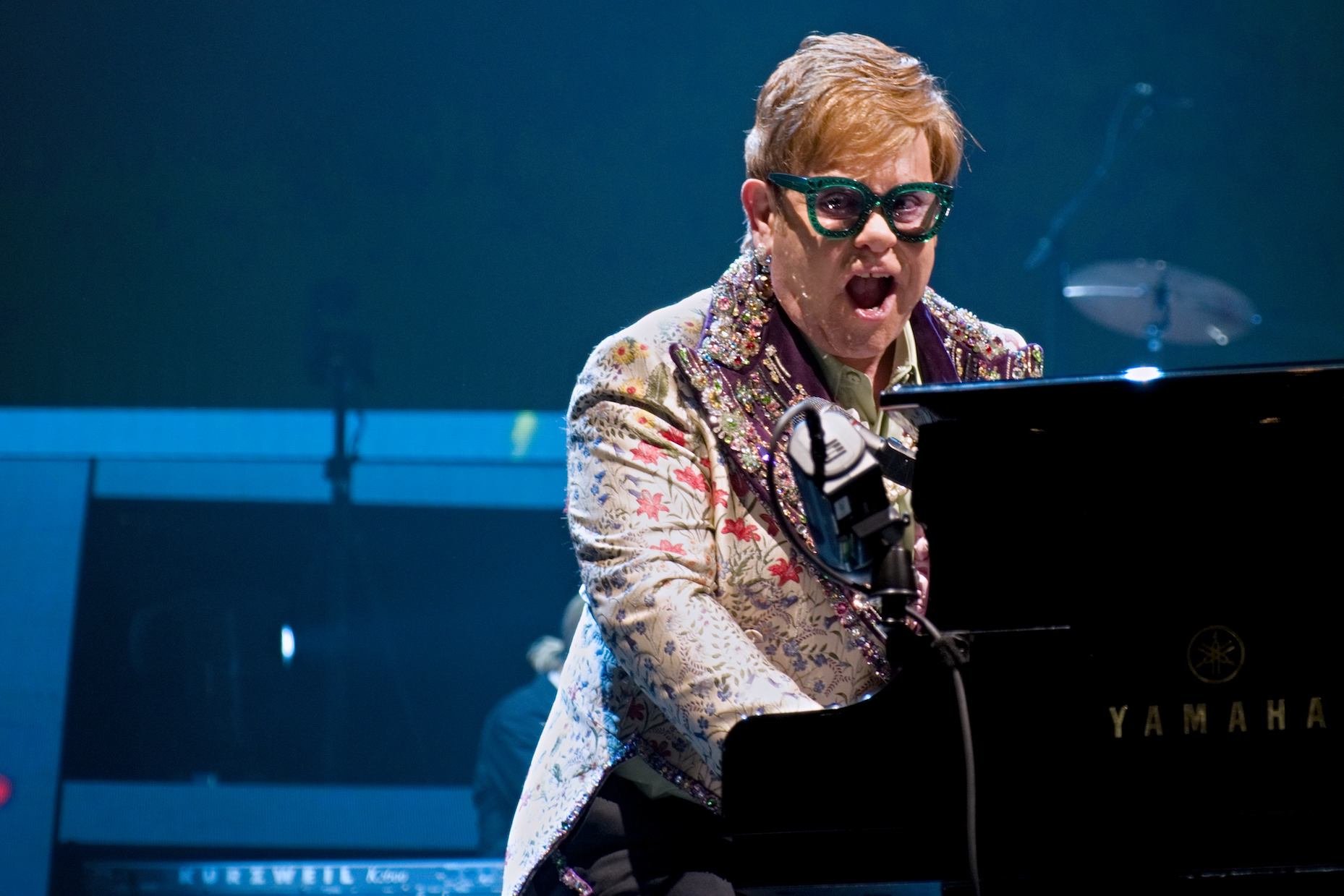 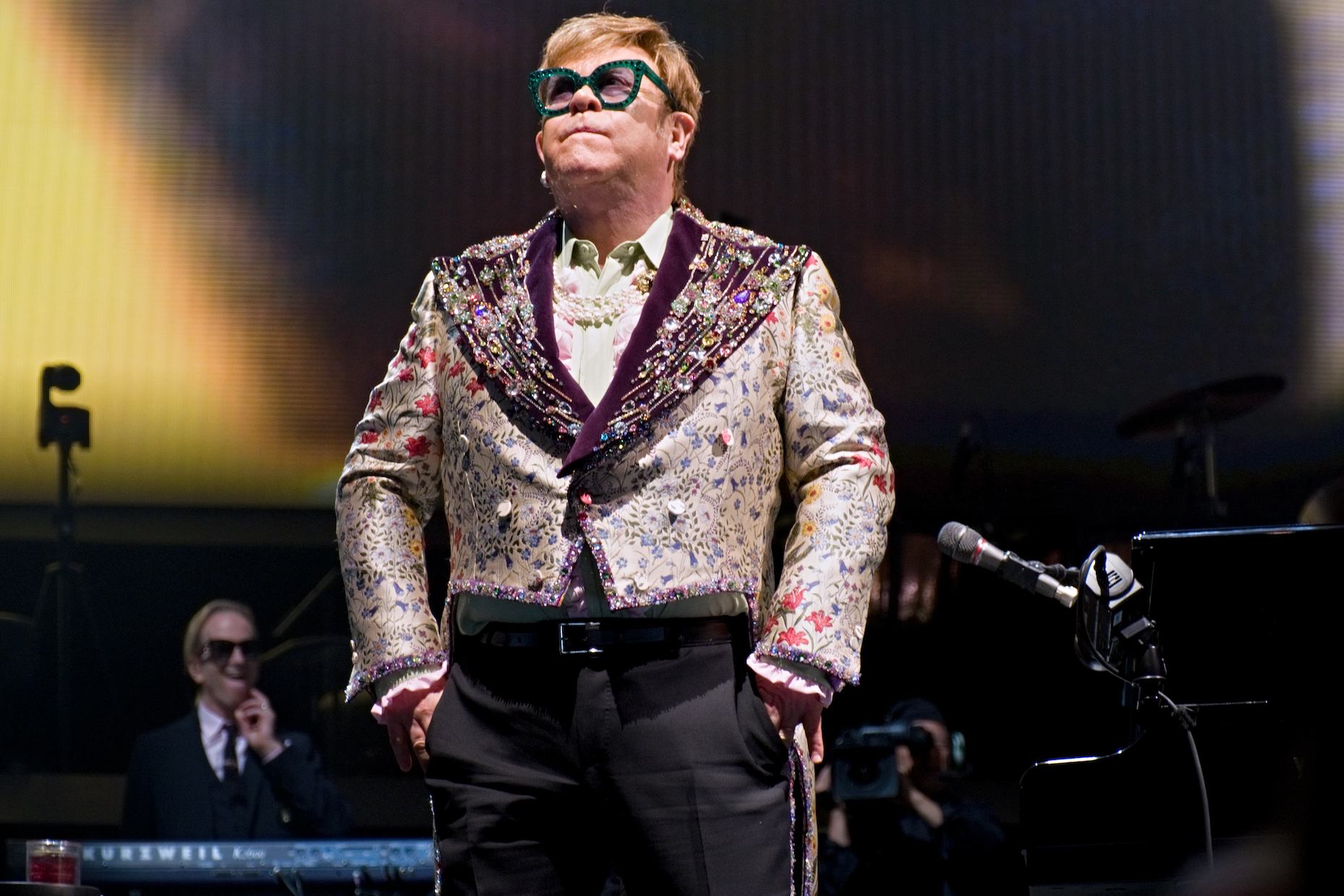 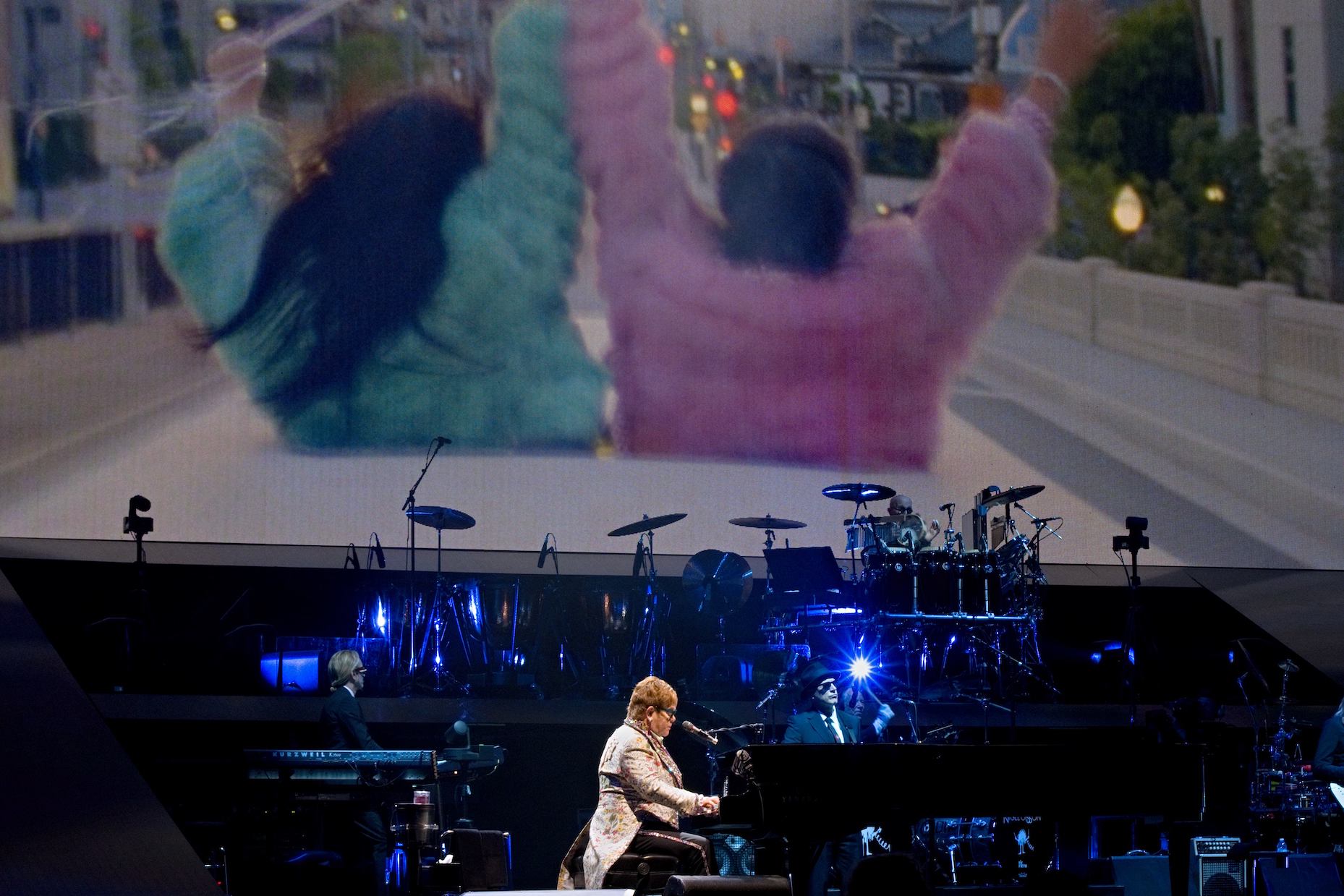 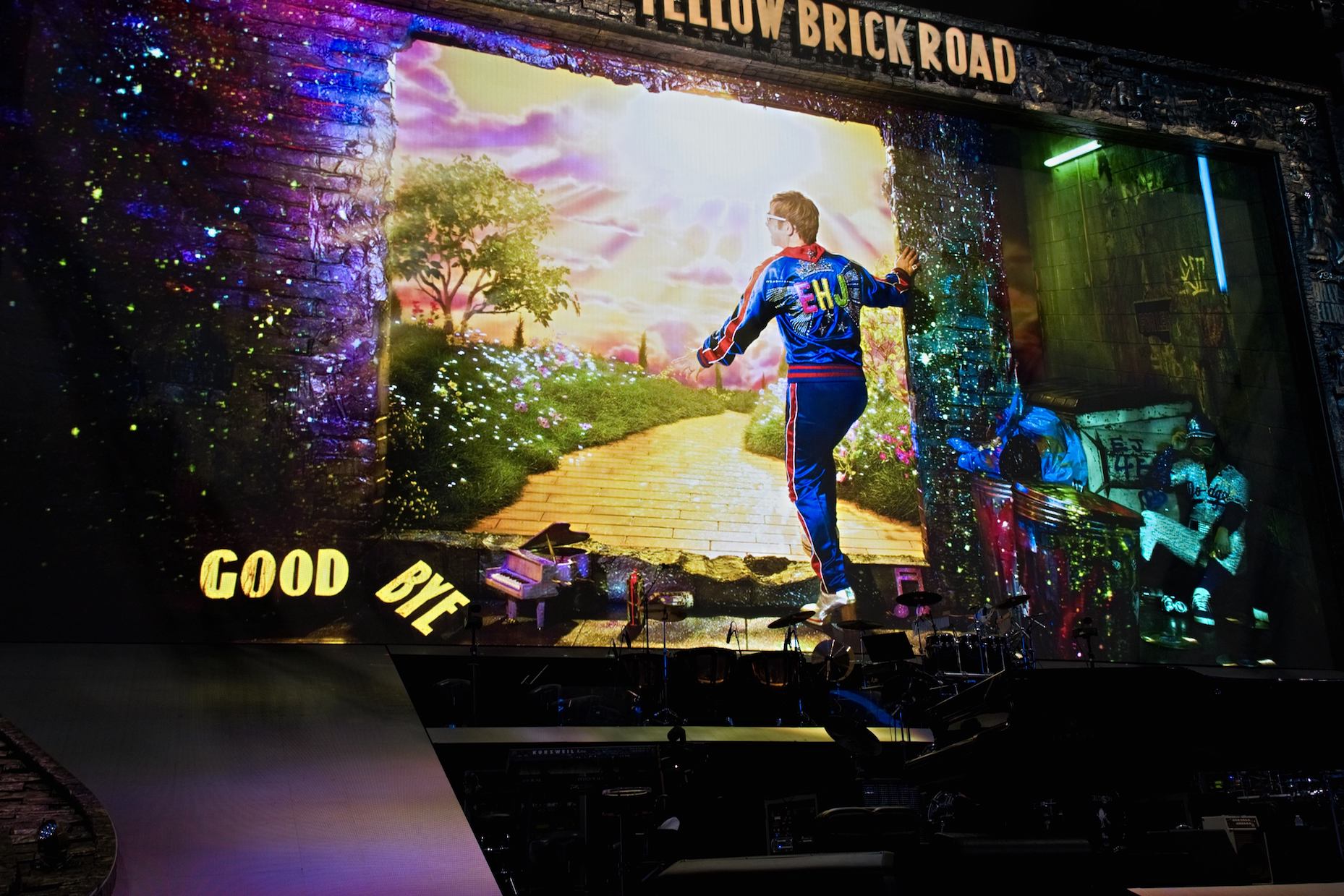