P!nk Soars Into Golden 1 With Her “Beautiful Trauma” Extravaganza

P!nk Soars Into Golden 1 With Her “Beautiful Trauma” Extravaganza

This is an archived review of the P!nk show (with Julia Michaels), at the Golden 1 Center, Sacramento, on April 10, 2019.

Wow. I could end the review right there, and that would perfectly sum up P!nk’s “Beautiful Trauma” show. But I’ll continue anyway…

P!nk made a dazzling entrance in her first headlining concert in Sacramento Wednesday night. As the curtain at the back of the stage fell, P!nk could be seen dangling from a giant chandelier, doing acrobatic moves above the stage while singing the Grammy-nominated opening number “Get the Party Started”.

While P!nk mesmerized the audience with what would be the first of several aerial acrobatic displays, a multitude of dancers and vibrant set-pieces graced the stage below. No doubt most of the audience kept their eyes locked on P!nk and the chandelier above, until she finally touched down and paraded around the various catwalks jutting out into the audience, joining the dancers in well choreographed moves that seemed equal parts organic and well practiced.

The Beautiful Trauma tour began March 1, 2018, so is now a month into its second year. The tour is scheduled to conclude October 5, 2019, in Rio de Janeiro, Brazil as part of the Rock in Rio Festival, after a total of 157 shows. If you want to see how an arena show should be produced and executed, go see this show. It’s the high water mark for arena shows, to be sure. Part pop/rock show, part high-flying circus performance ala Cirque du Soleil, part choreographed dance routines, and all unadulterated fun.

The stage sets changed throughout the night, with props such as trees descending from the rafters, large props coming and going from the stage (including, at one point, a gigantic inflatable Eminem during “Revenge”, on which the two artists collaborated), and the large video wall behind the stage constantly changing to help set the mood and make the set feel immersive.

As for the aerial acrobatics – again, wow! Several times throughout the night P!nk would ascend to the sky above the crowd, sometimes strapped to a harness, other times without wires (or safety net)! Sometimes it was just P!nk doing flips, twists, and other acrobatics, but at one point she was joined by another acrobat, both without wires. He kept himself aloft by holding on to chords anchored to the track high above. During this aerial duet, P!nk kept from falling to the ground by holding on to the other acrobat, sometimes lying or standing on top of his vertical body, and at one point he was keeping her aloft with nothing but his feet. As he held himself upright with the chords, he had one foot between her knees and the other underneath her neck, keeping her horizontal to the crowd far below. It was truly spectacular.

The biggest aerial feat came near the end of the show, during her performance of her number one hit “So What”. P!nk, strapped to several wires by a harness, flew (and I mean FLEW!) into the air like a superhero, and proceeded to reach every corner of the arena. P!nk seemed determined to make every fan, no matter where they were sitting (even in the nosebleeds), feel like they had front row seats. She zoomed to the top of the arena, flying close to the crowd in the upper sections, floated above the crowd in the middle sections, pausing frequently to wave at fans who probably had no idea they’d get to see the artist up close even from the (relatively) cheap seats.

The show was a spectacle, but what about the music?

P!nk’s powerfully soulful voice was on full display throughout the evening, and the Golden 1 Center was no match for the power of her pipes. Just how good is her voice? Fellow pop-star Kelly Clarkson has said P!nk’s voice is “the best of our generation”, and Adele has said that hearing P!nk perform live when she (Adele) was a teen was one of “the most defining moments” of her life.

P!nk included popular hits from most of her albums, including two new songs, “Hustle” and “Walk Me Home”, from her upcoming 8th studio album “Hurts 2B Human”, due out later this month. Hustle takes the place in the set formerly taken up by a cover of Nirvana’s “Smells Like Teen Spirit”.

The night’s 20 song setlist was broken up by a few short video vignettes, the most powerful of which was “My Daughter is Beautiful”, featuring the audio of P!nk’s acceptance speech for the Video Vanguard Award at the 2017 VMA’s, in which she recounted a story of her six-year-old daughter Willow saying she felt ugly, while the screen accentuated the words. It was a powerful message that got perhaps the loudest applause of the night.

The show opener was Julia Michaels, who may seem like a newcomer, having released her first solo album in 2017, but she’s been writing songs for other artists for years, including Selena Gomez, Demi Lovato, Fifth Harmony, Shawn Mendes, Britney Spears, Justin Bieber, Hailee Steinfeld, and Gwen Stefani. In fact she’s co-written two songs with P!nk, including “Barbies”, which P!nk performed Wednesday night (and was sure to give Michaels a shout-out).

Julia’s energy was infectious, and her stage presence was far beyond what you’d expect from someone relatively new to touring. She had the crowd out of their seats throughout her set, singing along to several of her songs. Don’t be too surprised if Michaels returns to Golden 1 in a few years as a headliner. 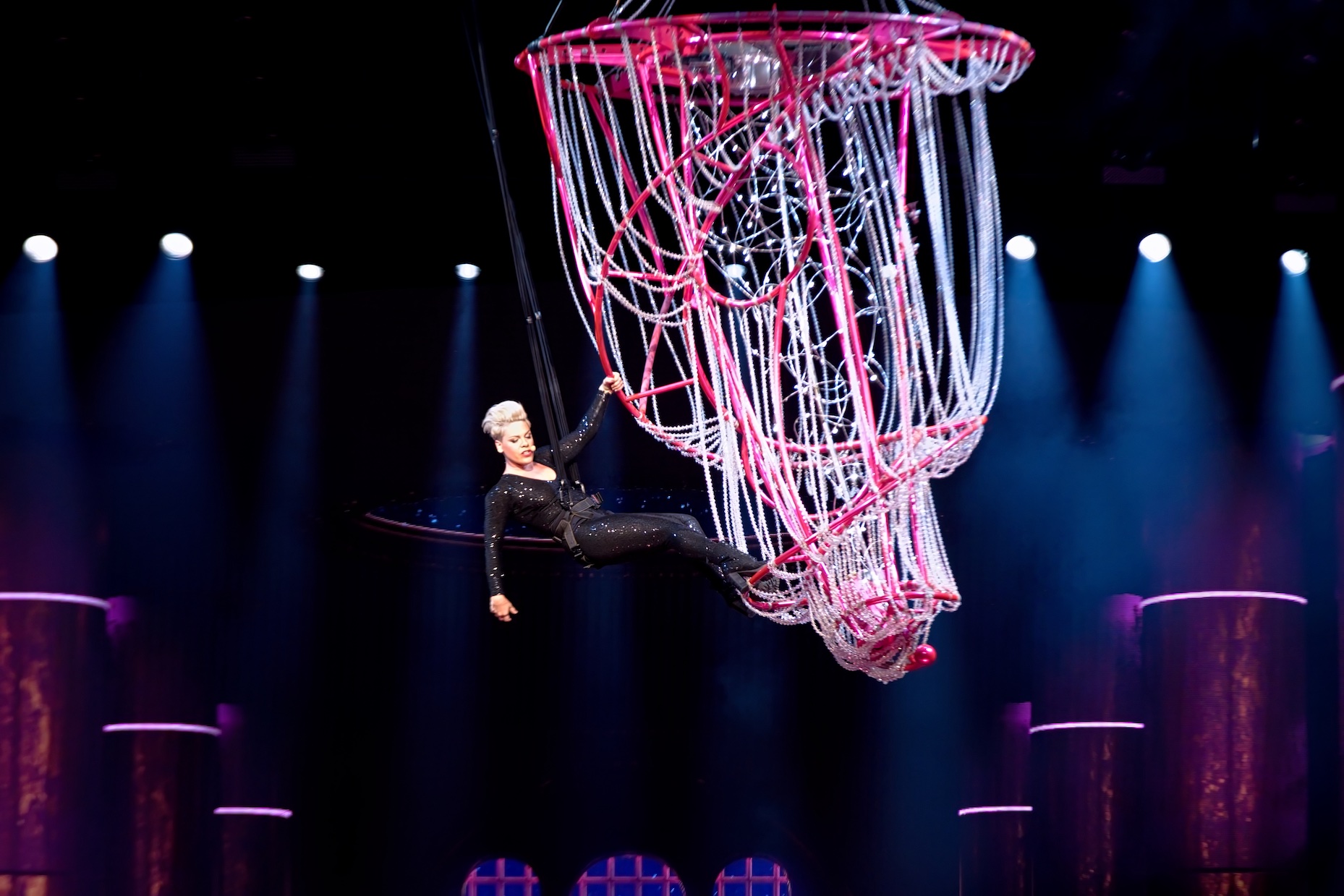 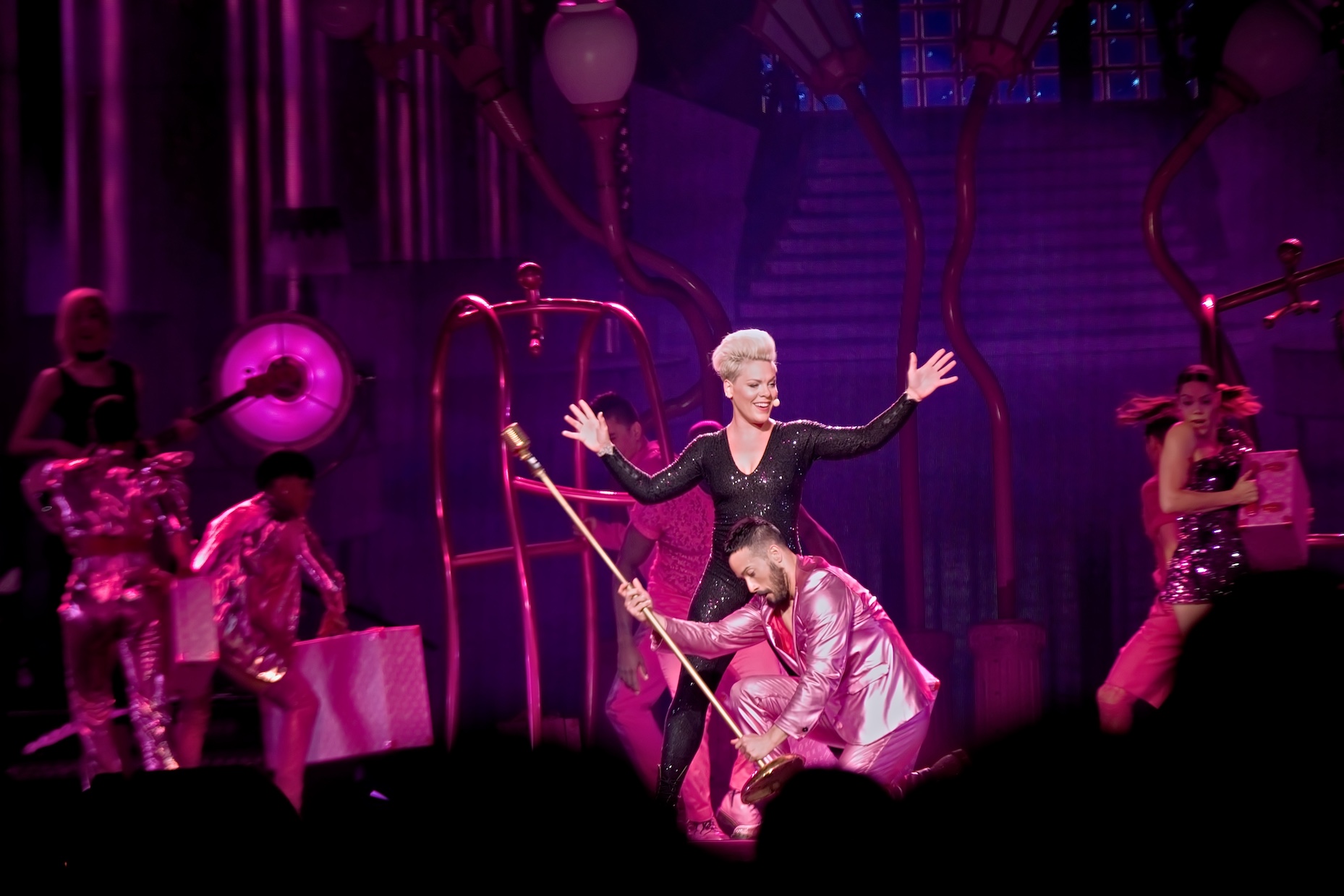 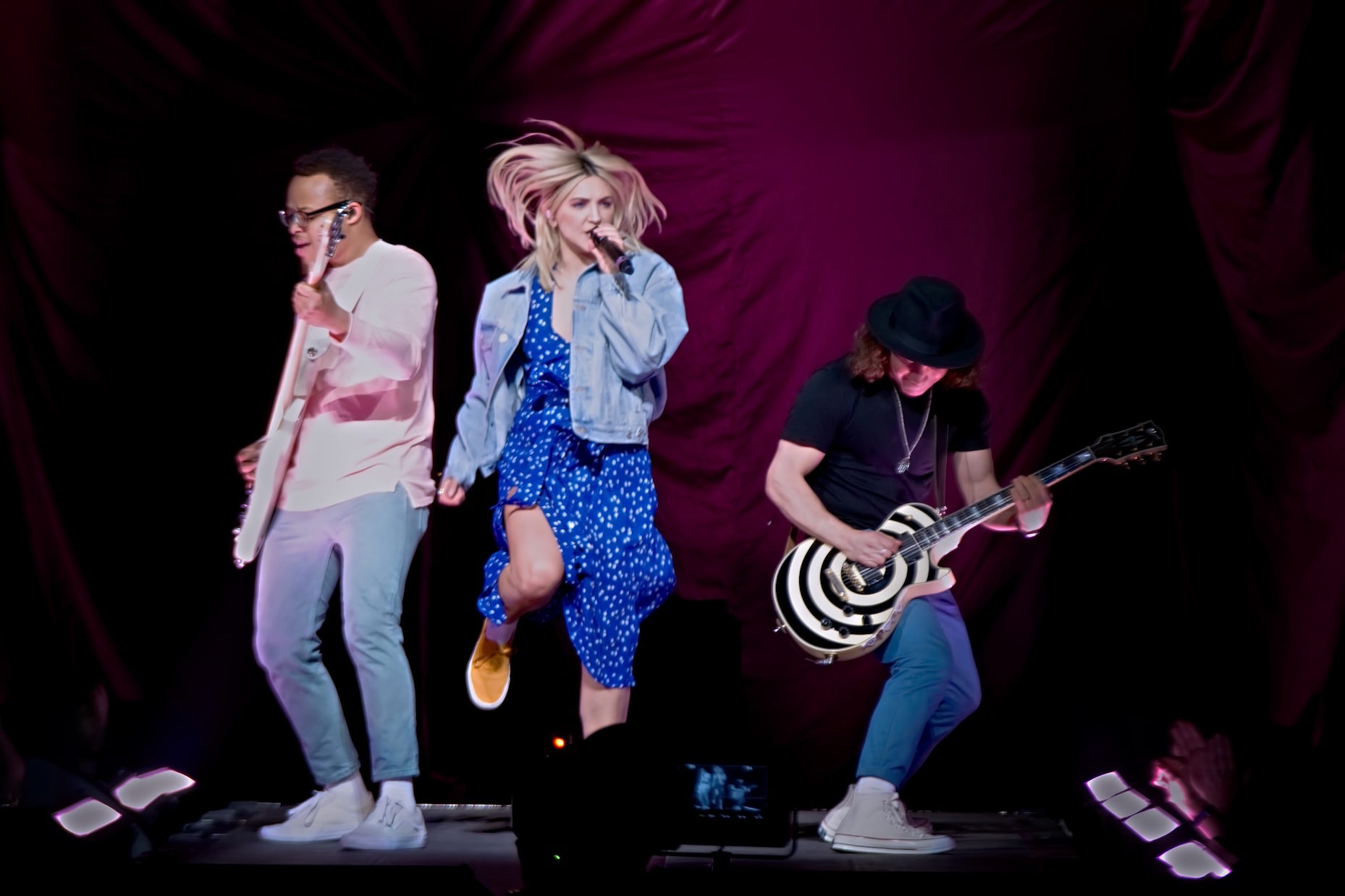